The figures represent a 27% increase in the number of donations made when compared with 2019 and a 32% uplift on the total donated, demonstrating the eagerness of independent retailers to support their local community during difficult times.

December was also a record month for Making a Difference Locally, with donations totalling £303,549 made via the charity.

During 2020 the majority (62%) of donations were given to good causes promoting good health and wellbeing, such as hospital trusts, mental health charities, loneliness support groups and youth football teams to name just a few. Meanwhile, 17% were made to education and employment facilities, 15% supported charities promoting good food and nutrition (such as foodbanks) and a further 4% of donations were given to causes providing shelter and security services, including centres for the homeless. 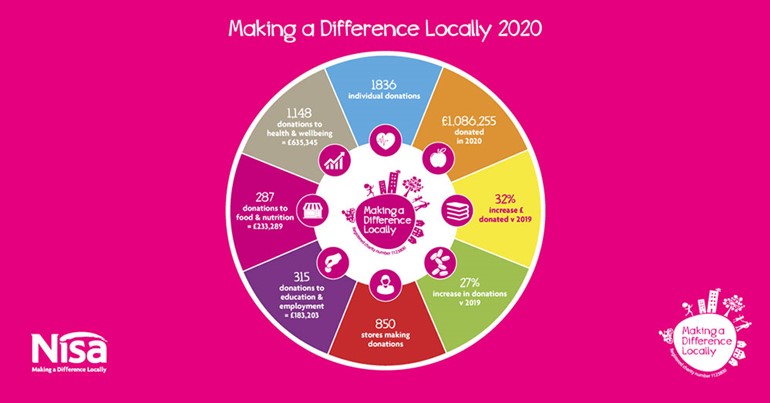 Kate Carroll, Nisa’s Head of Charity said: “Last year was a fantastic year for charitable giving by our partners and we’re thrilled that so many very deserving causes have benefitted from funding, especially during such difficult times.

“We’re delighted that communities have benefited from donations totalling over £1m in 2020, as the funding given by our independent retailers will make a significant difference for smaller charities and community groups in particular, who rely on the support of local people and businesses to stay afloat.”

Since its formation in 2008, Making a Difference Locally has raised over £12.3m and supported charities and other good causes with over 13,000 donations.