An exciting four-week programme of redevelopment is underway at a Loughborough convenience store which will see the realisation of long-held plans for the family run business.

Father and son team Paul and Jack Matthews are making the changes to their Bradley’s convenience store throughout February, planning to be ready to re-launch their new look shop by the end of the month. 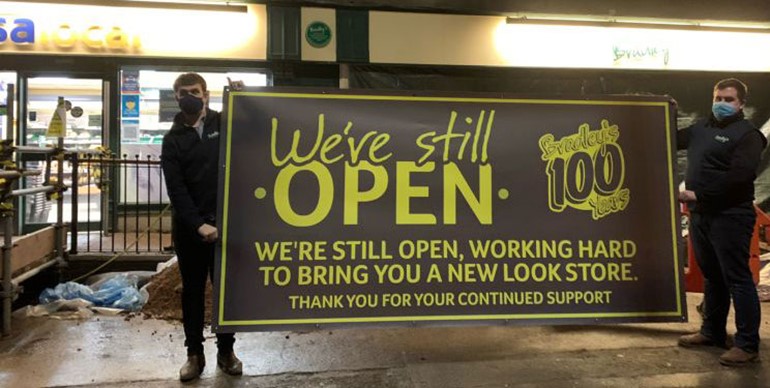 we realised the time was right to make some real changes

What started out as an expansion of the refrigeration in the 2,600 sq ft store has grown into a full refurbishment with new flooring, ceiling and store layout including moving the front entrance and adding in a kitchen.

Jack Matthews, who runs the store with dad Paul, said it soon became apparent there was much more that could be done than just extend the chilled space to turn the store into one fit for the future.

“We initially looked at making a few changes to the refrigeration and the bakery area but when we started looking at what we really wanted to achieve we realised the time was right to make some real changes” said Jack.

“We want to build on our fresh and chilled offer and will be growing our chilled bays from seven to 14 which will give us so much more space to extend our Co-op range as well as add more from our local suppliers including things like meal deals from our local butchers.

“We are installing Cooks freezers which will really add something to our range and we’ve also built a kitchen and will be producing our own Bradley’s sandwiches, wraps, fruit pots and so on.

“We have identified our USPs and worked on them and Dad and I are both really looking forward to the new challenge – we just want to get the store completed and start trading.”