They say good things come in threes and that’s certainly the case for one retailer who has just opened his third Nisa Local forecourt store in North Yorkshire.

The site, John’s first in Northallerton, sits on the fringes of the bustling market town and is already proving very popular with the local community.

And you only have to walk through the front doors to see that the impressive new store is most certainly an independent, family-run enterprise with an emphasis on independent.

The story of the Stevenson family’s forecourt business is told through a series of artistic story boards placed around the shop which all proudly declare their family business status – since 1978 when John’s father Ian was in charge of the first forecourt up the road in Marton near Middlesbrough.

John said: “For me it was really important to let our customers know that we are an independent forecourt, run as a family business. Within walking distance of the store we have almost every supermarket there is as well as the discounters and Marks and Spencer. I knew we were going to have to work hard here but we offer something a bit different through our independence.” 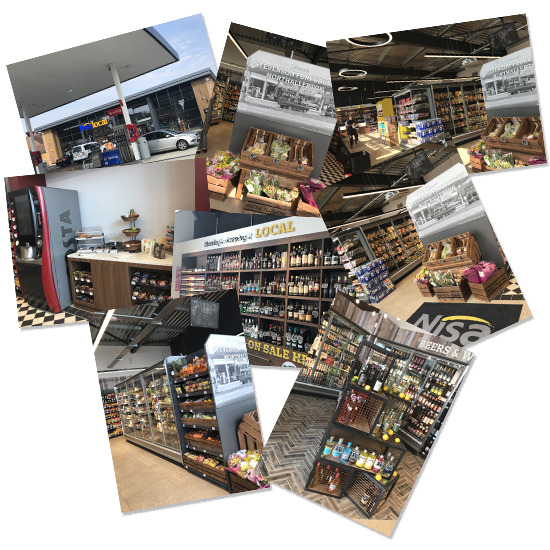 The store design is something John wanted to ensure made them stand out from the competition, insisting he didn’t want his fixtures and fittings to look like every other store.

“I got a lot of inspiration from stores in Ireland and also some of the concepts in Nisa’s Store of the Future Evolution shop that was exhibited at Stoneleigh. But throughout the whole development I said I just didn’t want it to be ‘samey’, I wanted it to look a bit different to other stores.”

And John is confident he has achieved that look, from the halo lighting along the front of the store, to the bespoke LCD lighting suspended over the licensed area to the variation of floor coverings that differentiate areas of the store and not forgetting the personalised story boards.

A modern unit within the drinks section boasts a wide range of craft gins and behind the counter, spirits are marked up with attractive paper price tags beneath a sign to shoppers that states: “thanks for keeping it local”.

Everything works together to create a unique shopping environment with a premium feel that is a great fit in Northallerton and after just a week of trading the future looks bright.

“Fuel sales are absolutely bouncing,” said John. “We’re way ahead of what we projected and sales in the shop are also going well. The great weather has really helped but I’m pretty confident that once we get our Food to Go fully operational, with the arrival of Subway, we will see sales increase further.”