An independent Nisa retailing family has re-vamped their award-winning city centre store to respond to changes in customer demand.

Brothers Ricky and Amrit Dougall have introduced a raft of new services to the Millennium View store in Coventry to appeal to the transitional demographic that make up a large proportion of the store’s custom and have seen immediate results in sales and footfall with an increase of 20 to 25% across food to go since the changes. 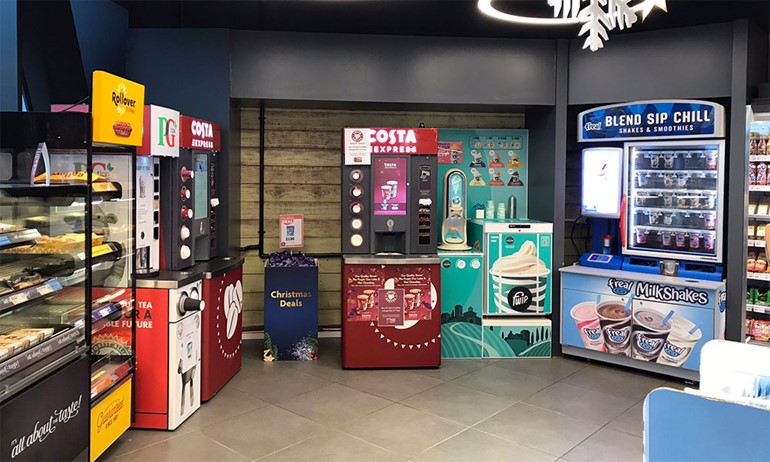 The store, which is located across the road from the bus station in the very heart of the city, was launched in February 2019 and is open 24 hours a day, seven days a week.

A serve-over food counter originally installed on the shop floor has been replaced by a bank of machines including f’real, Tango Ice Blast, Rollover, fwip, PG Tips, a second Costa Coffee as well as self-serve hot food.

Ricky said: “Customers didn’t want to wait for their food. We had to change that whole idea to fit in better with the transitional customers we mostly get in the store. The bus drivers especially were demanding something faster and more efficient from the food to go.”

A further chiller was added to the store at the end of last year to enable additional chilled food to go sales and the mini overhaul has also seen a re-lay of the general flow of the store with the licensed section opened up to better show off the wide-ranging offer and new signage has been erected to the exterior of the shop to better advertise the 24-hour opening hours.

Ricky said: “It’s working much better for the shoppers now and our food to go area is much more viable for us because it’s less expensive to run and we don’t need to staff the area.

We have seen an increase in spend in FTG since the alterations and adding in the new machines has definitely added incremental sales as well with a 30% increase year on year across the store.”