Nisa retailers go above and beyond 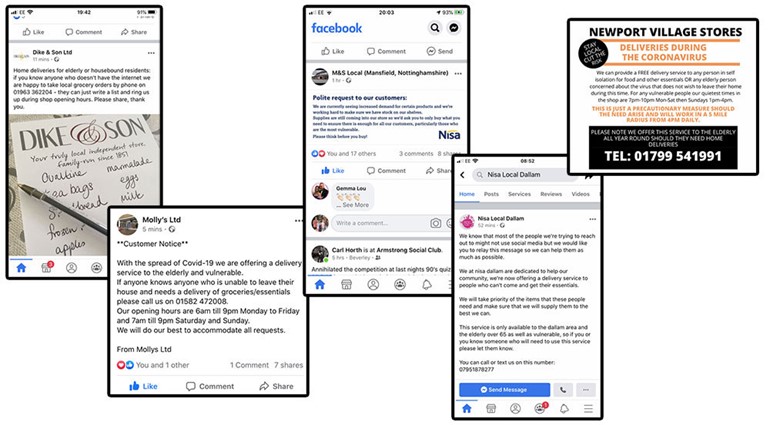 Nisa’s independent retailers came into their own at the weekend with some wonderful, community spirited steps taken to ensure vulnerable customers within their communities are being looked after.

Whilst many shoppers struggled to buy staple grocery items such as pasta, soap and toilet roll, many Nisa partners took to social media to offer a range of extended services to their customers, demonstrating the added value independent retailers offer.

In Essex, Alan Carr of Newport Village Stores in Saffron Walden, is offering a free delivery service to anyone in self isolation or any elderly people concerned about the virus and so not wanting to leave their homes. In a post on the store’s Facebook page, details have also been published of the quietest times in the shop so customers can choose to visit when the fewest number of people are about.

Alan added: “There will be a leaflet drop next week but if people know of anyone not on Facebook with concerns, we’re asking them to inform them and spread the word.”

The store even made it onto the local BBC News explaining what steps are being taken within the community to take care of the most vulnerable.

Elsewhere at Nisa Local Prudhoe in Northumberland, Miv Chahal offered free delivery of goods to shoppers via a social media post after a shopper rang the store desperate for some juice but unable to get out.

“Whilst driving to the house thought to myself, how many other people are unable to collect their own shopping? So, I have posted a notice to say that if anyone knows of any elderly people who are struggling to get out but may need shopping, that we are happy to deliver around the local area,” he said.

The Facebook post concluded: “As this virus takes hold, let’s look after our elderly neighbours in this time of need.”

Similar steps have been taken by many other Nisa retailers including in Luton at Molly’s, Dallam Stores in Warrington and in Stalbridge, where Dike and Son are taking orders by internet as well as telephone, encouraging those not online to “just write a list and ring us up during shop opening hours”.

At M&S Nisa Local in Blidworth, Nottinghamshire, the store took to social media to urge shoppers to “think before you buy”, posting a polite request encouraging customers not to panic buy and reassuring them supplies are still arriving in store.

And in Walsall, the Singh family took steps to secure hand sanitiser which they then distributed, free of charge, in 5l bottles to charities, schools, churches, food banks and other community organisations.

They also reassured shoppers via social media about supplies: “We’re working hard to keep all lines available and so far, we’ve not run out of anything. We have large stock reserves and will do everything we can to serve you, with absolutely no hiked prices.”

Amrit Singh posted on Twitter, “I’m using this time to reassure my customers we’re doing everything we can to be there for them!”

Hand sanitiser, anti-bacterial surface cleaner and similar products have been a key focus in the Nisa Local Whitehills Supermarket in Northampton where refill stations have been introduced, enabling shoppers to bring their own containers and fill them with their required solutions.

Sales director at Nisa, Steve Leach said: “These are unprecedented times, and everybody is understandably very concerned about what may happen. However, at times of crisis, I never fail to be impressed by how independent Nisa retailers step up to the plate and really go above and beyond for their communities.

“Everyone at Nisa is working hard to support our partners and make sure we get supplies to them so they can carry on providing their customers with everything they need and playing such a vital role to local people.”